“The increasing use of technology in finance (‘FinTech’) in recent years has added complexities and posed challenges for regulators and supervisors across the globe”. These words are taken from the European Parliament “Regulatory Sandboxes and Innovation Hubs for FinTech” report (September 2020) and they clearly depict the role of the so-called Innovation Facilitators, namely that tools created for financial institutions to let them test new technologies and services in a safe environment, supervised by the regulator.

The Regulatory Sandbox in Europe: functioning and goals

Leaving aside for the moment the Innovation Hub, we would like to offer a snapshot of the Regulatory Sandbox, a tool launched in 2017 from the UK and already widespread in Europe, but not only (also in Singapore, for instance). A sandbox is a fenced-in space where children can play safely on the sand, but this word has been passed into the informatics vocabulary, where it defines a safe environment created to test new software before their release. Also in the Regulatory Technology sector the concept is the same: the sandbox is a protected area dedicated to innovation, where financial institutions, supervised by the authorities, can experiment, namely create test and development environments with specific regulatory derogations. Besides, the sandbox aims to enhance the “supervisory understanding of emerging technologies, which can inform an adequate policy response to FinTech” (source: European Parliament). To sum up the goals of Regulatory Sandboxes, we would like to report the translations of the 4 points presented in a detailed article by fintastico.com.

And more, as highlighted in the SupTech report by PWC, this tool is designed also to:

As usual, practice introduces many limits and difficulties in comparison to the theory, but the first results observed by the Regulatory Sandbox Promoters countries - specifically the UK and the Netherlands - are encouraging (reduction of time and costs for the introduction of innovative ideas in the market, facilitation for the access to investments, collaboration with innovator institutions, etc.) and they have pushed other countries (the Followers, among which is Italy) to follow their route - waiting for the so-called Observers (for example, France and Germany) to align. Here we will not dwell  about that, but we refer to the already cited sources to go deepen in this topic.

The Regulatory Sandbox in Italy: what is the status?‍

Also Italy has equipped with a Regulatory Sandbox, specifically since the regulation included inside the article 36, comma 2-bis of the D.L. 34/2019 (the so-called “Decreto Crescita”), which requires the power of the Italian Ministry of Economy and Finance (MEF) to emanate ordinances to regulate the FinTech experimentation. The applications to access the Italian Regulatory Sandbox are limited to specific kinds of business and they also need to include particular requirements, always defined by the MEF (for further details on that, we refer again to the article by fintastico.com) and supervised by the so-called Comitato FinTech, responsible to formulate guidelines and best practices, and to promote the communication and the coordination between the sector operators and the institutions/authorities. Draw up proposals for regulatory interventions, make agreements with the Universities, simplify the iter of admission to the experimentation and facilitate the access to start-ups. These are just some of the goals of the Italian sandbox (a more exhaustive list can be found in the PWC report), inspired by the UK and Netherlands models. To briefly sum up, the Regulatory Sandbox is configured as a potentially powerful and increasingly necessary tool to face a situation that currently “can lead to market fragmentation and impede the scaling-up of financial innovations across the EU” (source: European Parliament) - and beyond.

At Aptus.AI we have been working for years in the Regulatory Technology field and we have created Daitomic, the AI solutions that will revolutionize the RegTech market. This banking compliance management platform exploits cutting-edge Machine Learning systems to automate repetitive tasks, saving time for human-centric and value-added activities. In this sense, Daitomic can be compared to Regulatory Sandboxes, at least as regards regulations accessibility and regulatory obligations automatic extraction, similarly aiming to reduce time and costs needed to be compliant with European and national banking regulations. Want to learn more? 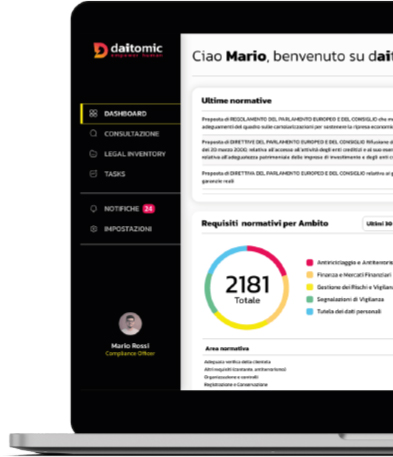